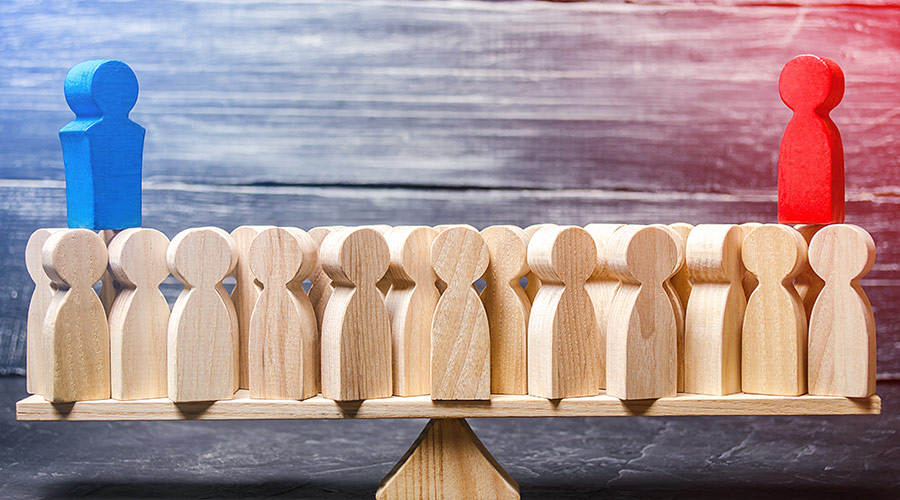 “In the future, everyone will be world-famous for 15 minutes.” This well-known quote, often attributed to Anndy Warhol (most likely erroneously), suggests that in a world with so many communication channels, fame can come to everyone.  Well, if regions, like people, can have their 15 minutes of fame, the Lehigh Valley certainly just had its time in the spotlight.  The Valley’s role as a key swing region in a premiere swing state drew world-wide attention to Northampton and Lehigh Counties.  As has often been the case, the results in the region aligned well with not only the outcome in Pennsylvania but the nation as a whole.  Strikingly, Joe Biden’s margin of victory over Donald Trump in the Lehigh Valley of 4.3% (51.5% to 47.2%) is nearly the same as Biden’s national popular vote victory margin of 4.4% (51.3% to 46.9%). These results help explain why national and international reporters flock to the Valley to get a sense of where the American electorate stands.

So what factors turned out to be pivotal in Joe Biden’s success in the Lehigh Valley, and did they reflect the national electoral dynamics?  First, Biden made tremendous gains in the region’s growing suburbs relative to Hillary Clinton in 2016.  Biden posted solid wins in large suburban townships such as Hanover, Forks, and Upper Macungie, significantly improving upon Clinton’s performance four years earlier.  These gains by Biden in the Lehigh Valley’s suburbs, along with modest improvements in the region’s boroughs and urban centers, offset President Trump’s overwhelming success and substantially enhanced voter yields across the area’s rural regions.

As with many aspects of life in 2020, the COVID-19 pandemic appears to have played a large role in determining the outcome of the Lehigh Valley’s presidential race.  A Muhlenberg College poll in September found the pandemic was among the top concerns of the region’s voters, and that among those likely to head to the polls, a majority rated the President’s handling of the COVID-19 situation as “poor.” Negative perceptions of the President’s efforts to tackle the pandemic seem to have cut into the incumbent’s strength on economic matters, where 4 out of 10 Lehigh Valley voters indicated they were financially better off since Trump took office, with only about 1 in 10 saying their financial standing had worsened since he began his administration in 2017. The remainder of the voters said their financial situation was unchanged during the Trump years.

While Biden’s success in the Lehigh Valley was certainly part of his boarder success in securing Pennsylvania’s coveted 20 electoral votes, the down-ballot races in 2020 painted a more mixed picture for the region’s Democrats and Republicans.  Despite Trump’s loss, Republicans were able to win the statewide offices of Treasurer and Auditor General for the first time in a generation, with GOP candidates in these races scoring victories in these races in Northampton County and significantly outperforming Trump in Lehigh County. First-term Congresswoman Susan Wild won reelection in the 7Th Congressional District, which covers the Lehigh Valley, with the Democrat beating Republican challenger Lisa Scheller by about 4% of the vote.  Scheller’s competitive performance in a district that Wild carried by nearly 10% in 2018 was indicative of the Republican parties rebound from the midterm challenges that had given Democrats control of the House two years ago, with the GOP picking up a significant number of seats nationally.

As 2020 winds down, the region’s status as one of the nation’s premiere bellwether political regions has only been enhanced. In the 21st Century, no region is a better microcosm of American electoral politics than Pennsylvania’s Lehigh Valley, with the choices made by voters in Lehigh and Northampton counties mirroring those made by the nation as a whole.  Given the Valley’s unmatched ability to capture America’s political mood, it’s reasonable to expect 15 more minutes of fame are headed the Lehigh Valley’s way in 2024.

The Spotlight’s On Us. What Will Pennsylvania Do?

The Mess the GOP Created, and What Democrats...

The Politics of Homeownership

Democrats: Make your choice on April 26

Where Do New Ideas Come From?

Is It Really as Easy as Sitting and Listening?