Rebirth of the Grand Lady of Hamilton Street 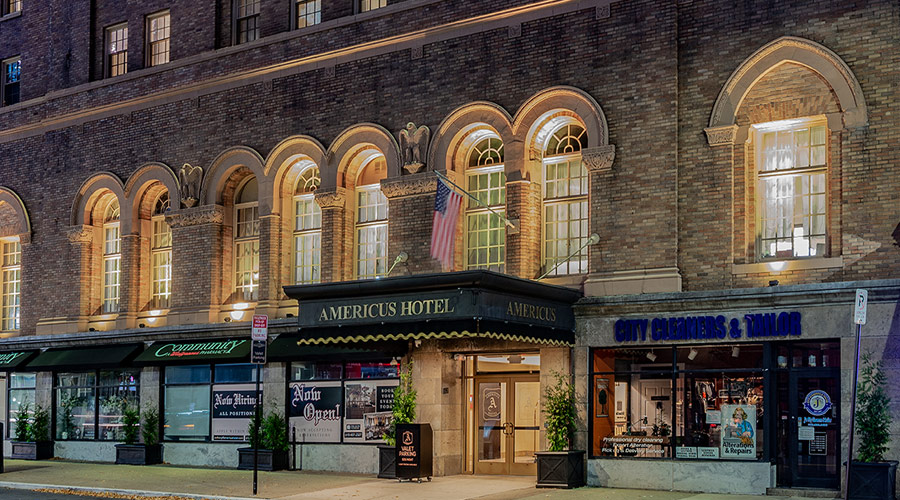 The Historic Americus Hotel was born in the 1920s, which one author called the “era of wonderful nonsense.” It was a time when downtown hotels were regarded as a sign that a city had gotten beyond the horse and buggy era

Ritter and Shay, leading architects out of Philadelphia in the 1920s, won the bid and were contracted to design and construct the Americus Hotel. The architects perfected the Spanish Moorish style so popular in those times. The plan first called for 270 rooms but was raised to 328. This was planned in hopes of getting the convention business. The Kitchen was led by Chef Warner Klotzl, a native of Switzerland who had most recently had the same position in a hotel in Chicago.

It was July 1926 that ground was broken for the Americus. Turning the first shovels were General Harry C Trexlor and Allentown mayor Malcolm W Gross. Originally it was planned

to be named the American Hotel, but it was designed in the Colonial Spanish style and named after Amerigo Vespucci, who was thought to discover America instead of Columbus.

Both the interior public rooms and exterior style reflect a mixer of the romantic Spanish-Moorish style with a touch of Art-Deco.

The doors opened for the Americus Hotel on September 13, 1927.

For the next 40 years, the hotel was the centerpiece of Allentown’s downtown business and retail district. Many celebrities and notable people who visited the city stayed there, including Richard Nixon in 1960. It was common for the hotel to hold various receptions, balls, and high school graduation proms in its ballroom.

In the late 1970s, as the downtown area began to change and decline, the hotel’s fortunes mirrored those of the city. It was added to the National Register of Historic Places on August 23, 1984. Its owners, The Moffa family, signed an agreement with developers to sell the hotel to 29-year-old Mark Mendelson. Things got bad in 1994, and the Americus lost its affiliation with Radisson. In 2002 the hotel lost its health license and closed its doors.

Albert Abdouche obtained ownership in 2009 from the city of Allentown. Trash was everywhere, the landmark’s interior was falling apart, and the wiring was nothing short of a disaster. Over the next several years, in expenditures of millions of dollars of his own money and loans, Mr. Abdouche completely renovated and restored the Americus Hotel back to its original grandeur. On July 26, 2021, the “Grand Lady of Hamilton St” reopened its doors. The hotel features 80 well-appointed guest rooms and 48 extended stay accommodations.

The Americus has a 5,000 square foot Grand ballroom space, a full-service restaurant, Café Americus proudly brewing Starbucks coffee, and all the amenities modern travelers come to expect from an upscale hotel.

Coming soon will be the 11th-floor Skyline Ballroom, corporate meeting space, sun deck, and a nightclub.

The Americus Hotel beautifully displays the original marble floors in the lobby and mezzanine, grand chandeliers in the lobby to go with palladium windows and golden gilded railings. Additionally, the ballroom is filled with natural light, a grand spiral staircase, original wall sconces, and emerald-laden chandeliers. The Historic Americus Hotel welcomes all to “be our guest.”

Jaindl: A Family History of Entrepreneurship

The Results of Dedication: Diet and Workout Secrets...

How People’s Perceptions of Your Vehicle Affect Their...